Does Windows 11 Silence the Critics?

Does Windows 11 Silence the Critics?

Microsoft released Windows 11 to the public on October 5, 2021. Who does need that operating system and what can it be used for?

When Windows 10 was first released for IT specialists in 2014 (official public release was on 29th July 2015) Microsoft introduced the service model. Instead of releasing a new operating system every couple of years, a new release of Windows was promised every 6 months. It was the operating system for cloud era when software changes rapidly and operating systems had to keep pace. It seemed like Windows 10 would be the last Windows to be released: it has been like that until now. The Windows 10 that you find in most computers nowadays is a lot different from the one released in 2015:

But looks like that even in services that are always up to date some version changes must be made from time to time. What are the changes that require version change?

Windows 10 does still use design language from Windows 8. And that design language was not well received on desktop (mildly put). Windows 10 design has improved a lot on Windows 8 and some of the most disliked features, like Start Menu that covers whole screen, app user interface that always has to be full screen and wastes space, and web browser that cannot keep up with changing web standards.

Microsoft wished to unify mobile and desktop user interfaces ten years ago. Rapid growth of Android and iOS ecosystems has discouraged those ambitions and lately it seems that Microsoft is not putting much effort into competing in mobile OS space. But legacy of that era still lingers around and look-and-feel of Windows applications varies. Every bi-annual update of Windows 10 has also improved on user interface consistency with lots of cracks still to patch.

Windows 11 user interface is a lot more consistent. New design language is different from old Windows and different form Windows 10. Now menus have a consistent look and feel all around and even menus for legacy applications are not out of place.

Windows 11 Start Menu will absolutely be the most controversial part of Windows in following months. First of all, it is completely different from Windows 10 and it is located in the center of the screen.

New Start menu is more simple and probably consumes less resources. There are no live tiles any more. Live tiles had its place when Start Menu covered whole screen in Windows 8, but have lost its usefulness as they became smaller. Microsoft has replaced live tiles with widgets bar, but jury on viability of this approach is still out.

In default setting, Start Menu is in the center of the screen. It may be more intuitive for first time users, but every other Windows user will move Start Menu back to left corner. New simple Start Menu should gain fans from those who want times of Windows 7 back. 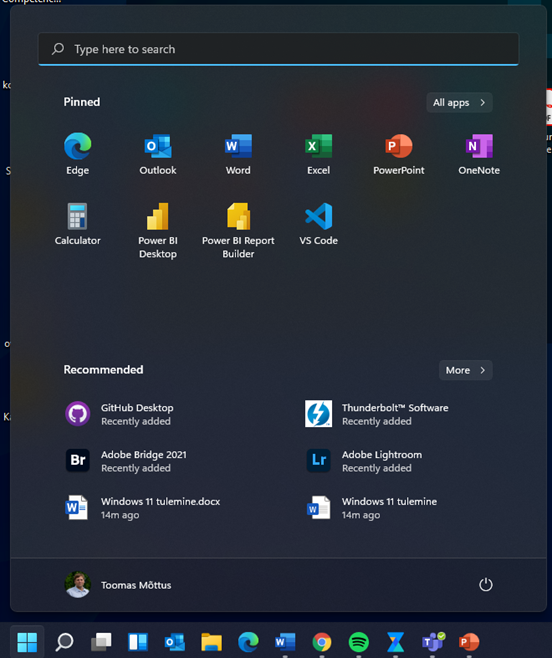 Settings menu has been completely overhauled. It is better organised, a lot more settings fit into the same place and no old Windows settings windows are visible. New setting pane is better looking and better organised. Specialists will dislike it because supporting different versions of interface is time consuming and locations of some settings do not follow old logic.

Windows 11 contains a lot of functionality that is difficult to call as new. Windows 11 is predominantly user interface update and underlying technologies have been introduced and tested in Windows 10. And even user interface features have been available through Microsoft or third-party applications.

One of the “new” features is desktop zones. It was first introduced in Windows 8 where you could resize a window to exactly half a screen. After several improvements you can sort your applications to sever virtual desktops and to custom zones on your screen. For some advanced features you just needed Windows PowerToys applications. In Windows 11 you can access virtual desktops straight from application switcher menu and zones are available straight from application resize button.

Teams and Onedrive are integral parts of Windows 11. If you have been using latest Windows 10 update and latest Office 365 desktop applications, you will not notice any change. And most people where companies regularly update computers, the change is trivial.

Windows 11 reaches public release in autumn, but it can easily be called spring cleaning.

Sometimes you need to change version number for an OS to throw out stale stuff. Windows 11 is a version of Windows 10 where no core technologies have been replaces, but wardrobe has been updated to correspond to the latest fashion.